The Carnegie Initiative, a non-profit platform, was started to honor celebrated hockey player Herb Carnegie by his daughter, Ms. Bernie Carnegie, leading sports personalities and people from the corporate sector. Bernie, co-director and co-founder, The Carnegie Initiative, is the writer of Herb’s motivational autobiography ‘A Fly in the Pail of Milk,’ where she honors her father for being an outstanding semi-pro black hockey player in an all-white team. When racism was at its peak, Herb ensured that his name was chartered in golden letters on the semi-pro hockey scene in Canada while ensuring to open the way for many other Blacks. Herb also authored the very famous Future Aces philosophy that has been used by hundreds of schools across Canada, enriching millions of lives by offering positive lifestyle choices geared by sports initiatives at schools. It encourages kids from all ages, backgrounds, and colors to play the game while learning key life lessons, like the art of sportsmanship and overcoming obstacles on the way. The Carnegie Initiative was formed to respect Herb’s philosophy and legacy and take it forward to fortify the concept of inclusive and supportive hockey in the North American continent. 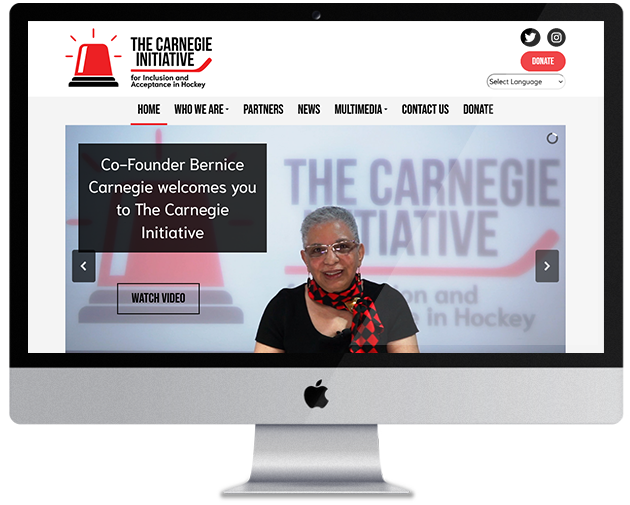 The objective was to create a unique responsive website for The Carnegie Initiative. We needed to first understand the purpose behind creating the Initiative and the website. We started with creating a mockup offering unique color combinations, fonts, layout, and schemes. We also collaborated with the team at The Carnegie Initiative to come up with out-of-box bespoke logo designs. The SLK designers worked round-the-clock to curate the most relevant logo designs offering multiple variations. The Board at the Carnegie Initiative finally settled for the current design that aptly exemplifies a noble and learned cause for which the Initiative was formed. The next step was to curate the graphics, for which we received 360-degree support from the Carnegie Initiative team. A custom slideshow that features on the top banner was decided jointly by us to offer crisp and clear information to interested people in the form of videos, pictures andalso featuring the press release. We have also included the custom photo gallery and video gallery seamlessly on the Home Page for offering a deeper insight into what The Carnegie Initiative is involved in. The SLK team has used Joomla CMS extensively for content management, including editing the content and making adjustments. The team at The Carnegie Initiative and SLK also decided to consciously make the newsletter subscription, the Contact Form, and the Donate Form, an integrated element of the Home Page so that interested people can use the interface to get added to the reader list and also donate to the righteous cause